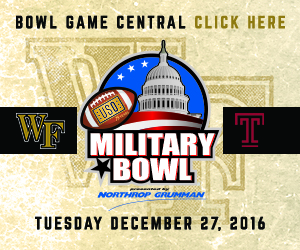 The Demon Deacons are headed to a bowl game for the 11th time in school history! Wake Forest will take on Temple on Tuesday, December 27 in Annapolis, MD for the 2016 Military Bowl presented by Northrop Grumman. Kick-off is set for 3:30 p.m. EST at Navy-Marine Corps Memorial Stadium. The Alumni Engagement Office is partnering with Athletics to host events in DC and Annapolis for the bowl game. We hope you will make plans to join us at the following events:

Gather with fellow Wake Forest fans in Washington, D.C. for this signature event at City Tap House. Tickets are $30 per person (children 12 and under are free) and include light hors d’oeuvres and two drink tickets (cash bar available). Online registration will close at 10:00 a.m. on December 23, and we will accept cash and check at the door.

The Streakin’ Deacon, The Spirit of the Old Gold and Black, and a Wake Forest military family will be joining the Budweiser Clydesdales, musical groups, civic organizations and others in the 2016 Military Bowl Parade from City Dock to the Navy-Marine Corps Memorial Stadium. We are excited to honor the Krivda family as our Wake Forest University guests at the Military Bowl! The commitment to service is a core value for the Krivda family. Each member of the family of six  is either retired military, in military service or preparing to serve in the military. Wake Forest ROTC cadet Katie Krivda, a biology major and chemistry minor, has a twin brother, Cadet Joe Krivda, at Notre Dame University. The family’s second set of twins, Kevin and Dennis Krivda, will be starting college in fall 2017 as recipients of ROTC scholarships. The Krivda family will be walking alongside the Streakin’ Deacon in the parade.  Admission to the Military Bowl Parade is free.

Wake Foresters can purchase a tailgate ticket for $40 ($15 for children 12 and under) which includes BBQ chicken, pulled pork, beef brisket, assorted sides, cookies/brownies, tea, lemonade and two drink tickets for beer or wine (for those over 21). Cash bar will also be available.